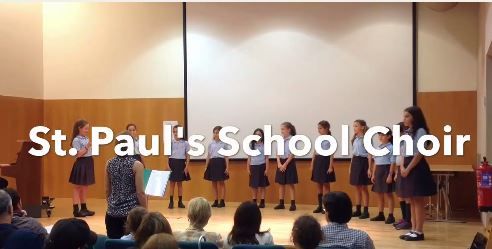 The newly formed St. Paul’s School Choir,  made up of  students from 2nd to 6th grade of Primary, has been practising since last October, on Tuesday afternoons from 4:45-6:00 pm. This activity is directed entirely in English by two experienced music teachers, Jessica Armstrong and Abbey Sykes.

As part of this after school activity, they have played “getting to know you” games, learnt new warm ups, explored good vocal technique and expression when they sing, and  have also begun to learn to sing in parts, by learning rounds and very simple harmonies.

The above video is of their Summer Concert, held on Tuesday, 19th of May in the school auditorium which included the following selection of songs, from pop to gospel to world music.

The concert was a huge success, enjoyed by  students, parents and teachers alike, and we would like to take this opportunity to congratulate all the choir memebers for their hard work and dedication!

The choir  will continue next  October and will be open to all pupils from 2nd grade of Primary to 1st of ESO.

You can find out more about which cookies we are using or switch them off in settings.

This website uses cookies so that we can provide you with the best user experience possible. Cookie information is stored in your browser and performs functions such as recognising you when you return to our website and helping our team to understand which sections of the website you find most interesting and useful.

Strictly Necessary Cookie should be enabled at all times so that we can save your preferences for cookie settings.

If you disable this cookie, we will not be able to save your preferences. This means that every time you visit this website you will need to enable or disable cookies again.

This website uses Google Analytics to collect anonymous information such as the number of visitors to the site, and the most popular pages.

Please enable Strictly Necessary Cookies first so that we can save your preferences!